Greece Wants Him in Prison. Instead, He’s in the E.U. Parliament.
Leaders of the neo-fascist Golden Dawn party were convicted of running a criminal group. But one is living free in Brussels, immune from extradition as a European Parliament member.

BRUSSELS — It was a routine European Parliament session in late November, with lawmakers discussing growing tensions between the European Union and Turkey, when the speaker of the house casually gave the floor to a Greek deputy, Ioannis Lagos.

Mr. Lagos lit into Turkey, one of his favorite targets — he was penalized earlier this year for ripping up a Turkish flag during a debate — for about a minute, raising his voice to a shout until the chair cut him off.

The European Parliament is no stranger to heated speeches and theatrics. But Mr. Lagos is no ordinary deputy.

He’s a convicted criminal, found guilty by a Greek court in October and sentenced to 13 years in prison for his part in setting up and running the violent, neo-fascist Golden Dawn party, which the court ruled was a criminal organization.

Yet for now, Mr. Lagos, a boxy, broad-shouldered man with close-cropped hair and a beard, is living in Brussels, immune from extradition as an elected member of the European Union’s legislature. Greece has asked the European Parliament to waive his immunity, so that Belgian authorities can arrest him and send him back to serve his sentence, but the process has been mired in bureaucracy and politics and delayed by the coronavirus pandemic.In a court case that dragged on for five years and caught the world’s attention, Golden Dawn leaders and members were found to have formed and operated a criminal mob, destroying property, intimidating people, attacking leftist organizations and migrants and murdering an antifascist musician. Sixty-eight of its adherents were convicted.

Mr. Lagos is appealing the verdict, and he argued in an email to The New York Times that his parliamentary immunity should not be waived while that process, which could take years, is underway.

He contended that the trial was a sham and an exercise in political persecution. He added that he was in talks with a “European country that is willing to grant political asylum to me,” though he did not name the country.

Golden Dawn leapt to prominence a decade ago, blaming the European Union, elites and immigrants, particularly Muslims, for the country’s ills as a calamitous financial crisis pounded Greece. Previously an ultranationalist fringe group that had never held a seat in Greece’s Parliament, it won 21 of the 300 seats in the May 2012 election, including one taken by Mr. Lagos.

The party’s support eroded as the criminal case against it unfolded, and in the July 2019 election it lost all of its seats in the Greek Parliament. But shortly before that contest, Mr. Lagos ran successfully for the European Parliament, and then started his own party along the same extremist lines as Golden Dawn.

THE INTERPRETER: Original insights, commentary and discussions on the major news stories of the week.

Of the seven leading Golden Dawn figures who were sentenced to 13 years, five are in prison and one, Christos Pappas, is on the run. And then there is Mr. Lagos, who remains comfortably resident in Brussels, the seat of the European Parliament and informal capital in the European Union, still collecting more than 13,000 euros a month, about $16,000, in salary and expenses.

In early November, he complained about losing his stipends when the parliament was forced to suspend its sessions because of coronavirus restrictions. “It is unfair for us to have be deprived of the perdiems we are entitled to,” he said in an email to the Parliament’s leadership.

Mr. Lagos is several months away, at least, from being arrested and extradited to Greece to serve his sentence. On Twitter, he is crowdfunding for his legal fees and claiming that he’s the victim of a political crackdown by the Greek establishment that seeks to silence true patriots.

“He is in the core of the leading group of Golden Dawn, he’s one of the top five, not some kind of rank and file member,” said Lefteris Papagiannakis, a legal expert who was a member of the Golden Dawn Watch initiative, a civil society organization that meticulously covered the landmark trial and other issues pertaining to the group.

“Lagos is the muscle, the brute force,” he added. “He is the ultimate expresser of the violent nature of Golden Dawn.” 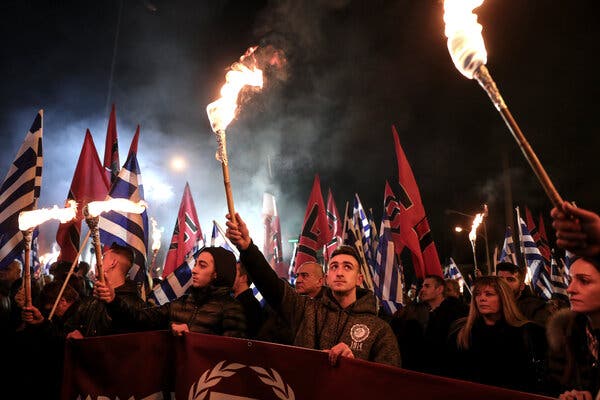 Support for the far-right party Golden Dawn surged in 2012, then waned, before a Greek court ruled that it was a criminal organization.Credit...Yorgos Karahalis/Associated Press

Other members of the European Parliament, whose 705 members are elected by voters in all 27 E.U. countries, are outraged that Mr. Lagos’s extradition is not moving faster, given the gravity of his criminal convictions.

Nikos Androulakis, a Greek deputy who was the only lawmaker to complain when Mr. Lagos was given the floor in the recent session, said that the delay created unacceptable embarrassment for the European Parliament, with serious legal and political implications.

“How is it possible that someone convicted of such serious crimes can take the floor of the only democratically elected institution in the European Union?” Mr. Androulakis asked. While the pandemic and the usual bureaucracy created obstacles, he said, the Parliament had to act with a greater sense of urgency in this case.

“This isn’t just any case, it’s a unique situation without precedent,” he said.

Eva Cossé, an expert on Greece with Human Rights Watch, said, “It’s certainly not a good look for Europe for a member of the European Parliament to be convicted of managing a criminal organization, and be allowed to walk the streets freely because of parliamentary immunity.”

But the head of the Parliament’s legal committee, which handles requests to waive immunity, was adamant that nothing could be done to expedite Mr. Lagos’s case.

The lawmaker, Adrián Vázquez Lázara of Spain, said in a recent interview that Mr. Lagos is 12th on a list of 12 immunity waiver cases the committee must deal with in due course, and that they must be addressed in the order they were received. He warned that any deviation from the process could expose the committee to accusations of bias.

“The rules and the law are the same, regardless of your ideology,” he said.

In a written response to questions about Mr. Lagos’s case, the European Parliament’s press office noted that “immunity defends the integrity and the independence of Parliament as a whole and it is not a Member’s personal privilege,” but added that “it is up to the Legal Affairs committee to organize their agenda.”

And former members of the legal committee claim there is space for accelerating waiver proceedings, and that the chair does have room to exercise some careful discretion. 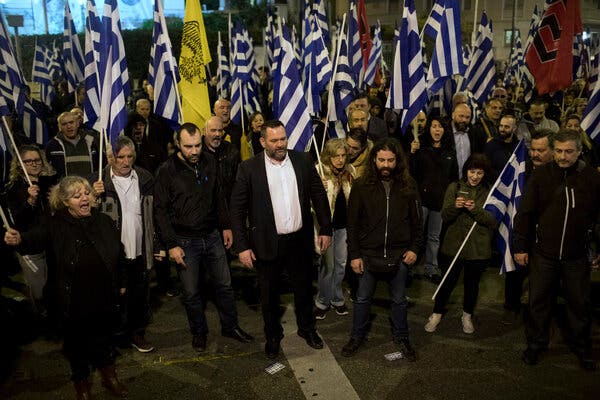 Ioannis Lagos, center, with Golden Dawn supporters at a protest in Athens in 2018.Credit...Petros Giannakouris/Associated Press

Soon after Mr. Lagos was sentenced, the Greek judicial authorities shared with the European Parliament 2,000 pages of documents in support of their request to waive his immunity. Several other steps must follow before the committee can make a recommendation on the case and the full Parliament can take a vote. Mr. Vázquez Lázara said that normally, the process takes about five months.

Heading the list of lawmakers facing possible immunity waivers are several Catalan members of the European Parliament, whom the Spanish justice system wants extradited for trial in Spain for their separatist activities.

While Mr. Lagos’s crimes are serious, the cases against the Catalan politicians are also “very, very serious,” Mr. Vázquez Lázara said. “They are accused of sedition!”

But sedition — incitement to overthrow the government — is no longer considered a criminal offense in many Western countries, while in others it is rarely prosecuted and carries only minor penalties. In addition, the Catalan politicians, unlike Mr. Lagos, have not been found guilty of anything as yet.

Ms. Cossé argued that the conviction of Mr. Lagos and his allies had a particular importance. “At a time of deep divisions and rising intolerance, the ruling against a party like Golden Dawn that peddled hatred resonated well beyond Greece,” she said.

Mr. Papagiannakis, the legal expert, said that the gravity of Mr. Lagos’s crimes meant it should be the committee’s priority.

“These people used the parliamentary cloak to protect themselves,” he said. “It’s incumbent on the committee to pursue this as a priority to send a message clearly, that this cannot pass.”